The premise of The Spiral Calendar is that fixed time periods derived from Fibonacci and lunar periods defined the emotional content of market prices.  In recent years, as external forces, Central Banks primarily controlled asset levels with massive money printing, the Spiral Calendar has been rendered nearly irrelevant. During this period I have tracked that correlation between Central Bank money printing and rising asset prices. And then along came Bitcoin. Bitcoin presents a market that is nearly pure emotion. Devoid of "valuations" and influence from traditional financial instutions. There are some large players pushing things around, so-called "whales", early adopters with huge inventory. The percentage moves in bitcoin, and related crypto-currencies have been huge.  The nearly pure emotional content of price action would seemingly be a prefect laboratory for Spiral Calendar analysis. A real life petri dish to test the hypothesis I put forward in the book 25 years ago.  I've been paying some attention to that market, especially when, in 2013, a dramatic parabolic top occurred into a new moon. One of the primary points of the Spiral Calendar was to look for emotional tops near new moons, with stocks in 1929 and 1987 and gold in 1980 as prime examples.  This year's new parabolic move in bitcoin and ethereum has me taking these markets seriously as test cases for Spiral Calendar analysis. The results, as the charts show, are extraordinary.  The Spiral Calendar has always been about finding fragments of these structures. Yet in its pure form of emotional speculation, bitcoin gives us extra ordinarily complete spiral structures, and ones that are anchored to the lunar phase/seasonal extremes as originally postulated by me twenty-five years ago.  These results are a tremendous affirmation of the original work. And ultimately, and much more importantly, they are dramatic and direct evidence of the engines at work on human consciousness. An important breakthrough in understanding what forces are driving behavior, and how those forces generate group/mob behavior. What follows are some charts. I think they speak for themselves. If you haven't read The Spiral Calendar book, it is out of print, but there are plenty of used and some new, copies available from Amazon at the link on the left of the page.

Those charts with implication for bitcoin's future price direction are behind the paywall, along with my commentary on short-term price expectations in bitcoin now.  Enjoy! 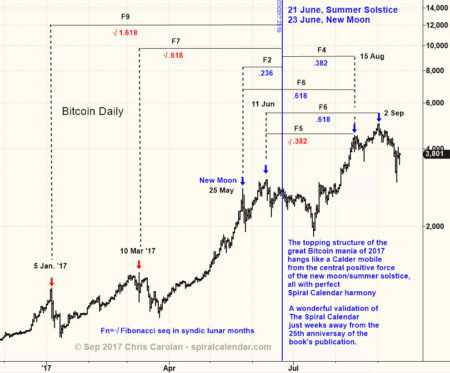 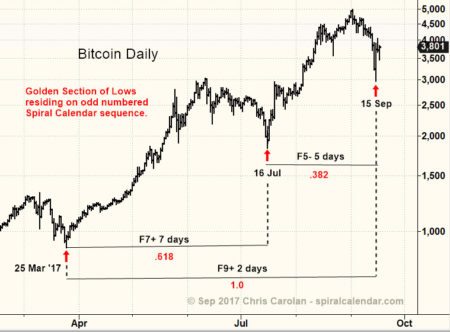